A time for deep reflection in Laos

A time for deep reflection in Laos

Buddhism is the primary religion in Laos. You only need to take a short stroll around Luang Prabang to understand how integral Buddhism is to the culture of this beautiful UNESCO Heritage town. With every footstep you feel tranquility alongside the vibrancy of beautiful colours from the copious temples and the orange clad monks going about their daily duties.

Every rainy season marks the beginning of very important period in the annual lunar calendar. This is when the 3 month retreat Kao Phansa begins. Kao Phansa is observed by Theravada practitioners of Buddhism mainly in Thailand, Myanmar and Laos. In Thailand it is referred to as Vassa and in Myanmar as Waso.

Known in the west as Buddhist Lent or Rains Retreat this is when all practicing Buddhist  monks should devote to one temple for 3 months. It is said that monks started remaining immobile in a temple during this time because they wanted to avoid killing insects and harming farmland. Apparently, traveling monks were crossing through fields, thus destroying the crops of villagers and farmers. After catching wind of this, Buddha decided that in order to avoid damaging crops, hurting insects, or harming themselves during the rainy season, monks should remain in their temples during these three months. 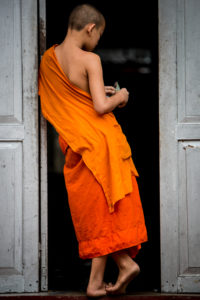 No matter where you go in Laos you will always encounter the vibrant orange of the monks.

During this time the monks take the opportunity to meditate deeply and devote entirely to their scriptures. Lay Buddhists will reduce the amount of celebrations held and weddings will not usually be celebrated in this period. The end of Kao Phansa is marked by Ok Phansa,which is when monks will atone for any wrong doing they may have committed during Kao Phansa. The lay buddhist will now show their gratitude to the monks for their devotion and bring donations to the temples, usually new robes. This year the end of Kao Phansa will be observed on October 5th.