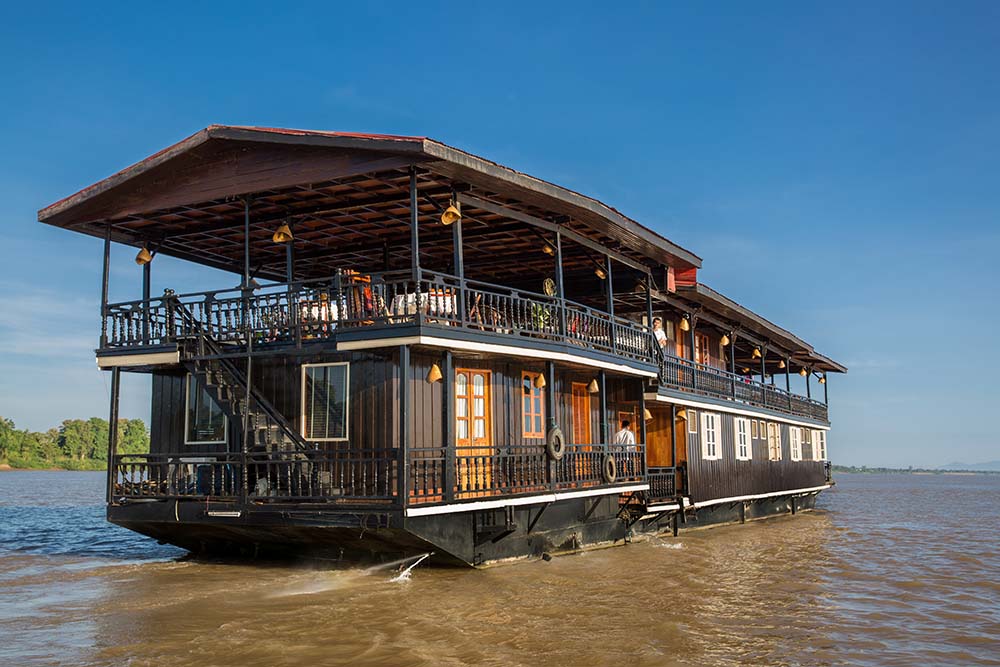 Our cruise boat, the Vat Phou, is named after the Vat Phou Temple ruins, which is the highlight tour of our Southern Laos Mekong River cruise.

The Vat Phou (Wat Phu) Temple is an ancient temple pre-dating the Khmer Empire.  The ruins of the temple are located just a few kilometers outside of Champasak town, the capital of Champasak Province.

The Vat Phou ruins are at the base of a curiously shaped 1,416 meter high mountain, which has a flat narrow peak and steep forested sides. On the summit of the mountain is a fifteen meter high peak.  This peak is the reason this site was chosen for the temple, as this is a natural lingam or symbol of the Hindu god Shiva. Carved representations of the female sex organs, called yoni, can also be found throughout the ruins.

The Vat Phou Temple was built between the 6th to 12th centuries. The Chenla Empire, a great civilization stretching south into Cambodia, north and west into Northern Thailand and as far as Burma was responsible for the building of the original temple in this site. Nothing remains of the once great city of the Chenla Empire, as all but religious sites were built of wood, which did not stand the test of time.

Between the 11th and 12th centuries, the Khmer architects restored and rebuilt many sections of the temple structures and it now has many features characteristic of the ruins at Angkor – stone causeways, decorative lintels and many carvings.  These days the Vat Phou temple complex is slowly being repaired and restored through the UNESCO World Heritage project.

Although Vat Phou was built as a Hindu temple, it is now used for worship by Theravada Buddhists.

Our Vat Phou Mekong cruise spends around 2 hours touring around the various temples and ruins of the Vat Phou complex. You will also get the opportunity to visit the Vat Phou museum at the bottom of the ruins complex.  Each tour is escorted by a French and English speaking guide to provide the best information possible for our guests.